Online course (~2 hours) + in-person workshop (3 hours). At the end of the workshop,  an independently written evaluation will be assessed for quality constructive feedback. Walk-ins are not allowed at workshops.

For those whose certification has lapsed anytime since 2008; consists of refresher online tutorials (~30 minutes), plus assessment (online completion of evaluation of a video student speech). Entirely online.

Interscholastic Speech contests involve subjective and standards-based evaluation of students across more than a dozen contest categories. Coaches and/or adjudicators (judges) gain certification through training, and can report time spent as professional development. 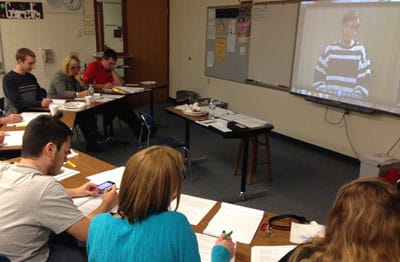 How many Speech adjudicators am I required to have?

How do I get certified to adjudicate (judge) Speech contests?

You will enroll in an online course that takes about 2 hours, followed by a 3-hour in-person workshop. The initial certification fee is $38 and lasts 3 years, at which point you will be able to renew. To learn more, visit our adjudication page.

Can I volunteer to host a workshop?

Please contact your district chair. To keep costs down, up to two workshops may be scheduled per district, but are contingent on availability of a trainer. Weeknight  workshops are scheduled between 4:30/5:00 – 7:30/8:00 pm, and Saturday workshops are scheduled from 9am-12 Noon. Workshops should be centrally located in an area, so they are more easily accessible to the greatest population. We will not schedule workshops during major break periods (the end of December), and will only schedule workshops over the summer if there is significant demonstrated need (we tried to offer several in 2018, and all but one were cancelled for lack of signups).

Are there online workshops?

We have attempted online workshops in the past, but participants were not interactive, and bandwidth for most people is not powerful enough to stream both live video of participants, as well as prerecorded video. Still, if existing workshops are cancelled, or there are other mitigating circumstances, a virtual alternative may be scheduled.

How do I renew certification to adjudicate (judge) Speech contests?

You will enroll in an online course that takes about 30 minutes, plus evaluating a student presentation. Upon receipt of the $6 recertification fee and successful completion of the course and evaluation, certification will be renewed. To learn more, visit our adjudication page.

How do I get hired to adjudicate/judge?

If you’re not affiliated with a particular school, or would like to offer your adjudicating services to additional schools and contests, please join our statewide email list. We do not have lists for specific regions of the state, because there’s too much overlap between areas with contests schools attend.

My speech adjudicator certification lapsed. Which course do I enroll in?

How do I register a complaint about an adjudicator?

We now have an online complaint form that can be accessed from the Speech Contests or the Theatre Contests pages.

Do you have a list of descriptive words/phrases adjudicators can use?